Routing comes into the picture when navigating from one page to another in a SPA app. Routing can be categorized in two ways: static and dynamic. SPAs follow a dynamic approach. In this tutorial, we will discuss a popular routing library used with React applications known as React Router. After setting up our routes, we are also going to discuss how to set up performance monitoring with Sematext in React apps with React Router library.

Before you begin this tutorial, you’re going to need the following:

Start by creating a new React project. Run the following command using npx. Once the project is generated, navigate inside the newly created directory and install the react-router-dom library.

Each of the packages has a different use case. The first one, react-router is the core package and is used with the next two packages listed above. The react-router-dom is used when building a web application. This is what we are going to use in this tutorial. The last one react-router-native is used in apps using React Native.

To see the React app generated, currently in action, make sure you are inside the root directory of the React project before you run the following command.

This is going to open the boilerplate React app screen at the URL http://localhost:3000/ in a browser window. 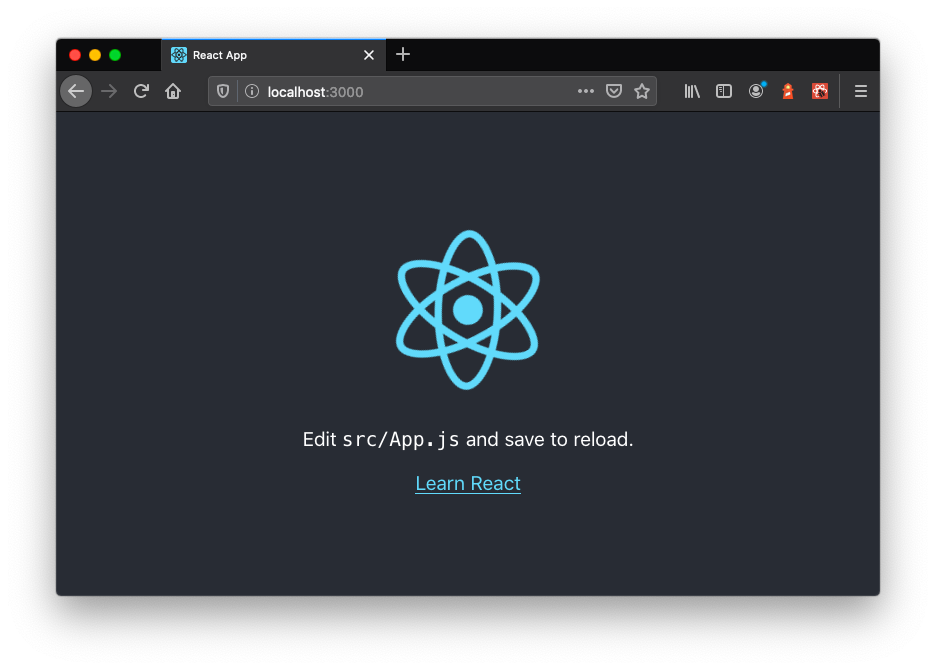 To create the first route in the React app, import the Router and Route from the react-router-dom library. Open src/App.js file and add the following import statement.

A Route is required to create an actual route. It is where the logic of routing is placed. It renders the UI of a component. It has a prop called path that is always matched with the current location of the app. Based on this prop, the desired component gets rendered. When the component is not getting rendered, Route returns null. The component name is also passed as a prop. All Routes are wrapped inside the Router component.

The path is currently pointing towards the Home component which has the following UI logic. Create a Home component inside src/components/Home.js file.

Now, import this component inside the App.js file.

Visit the web browser and see the Home component being rendered right now. 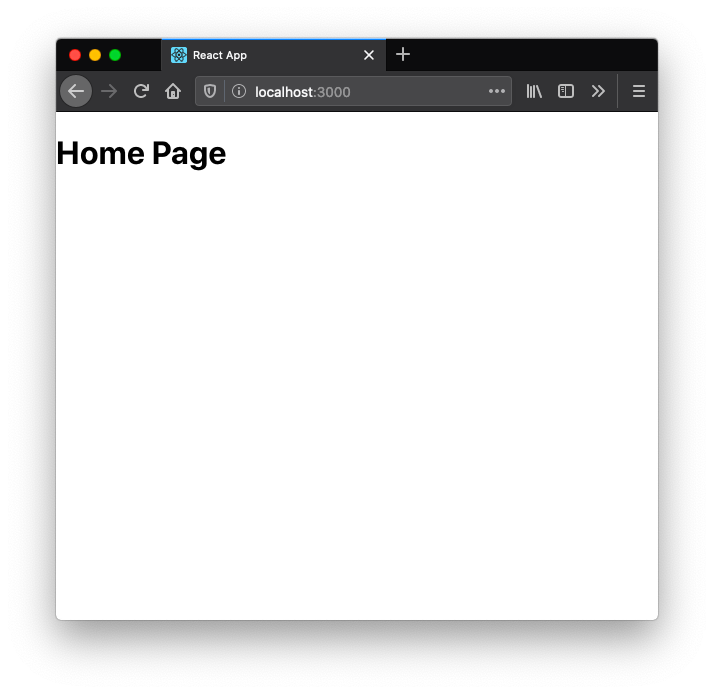 This is a bare minimum example. Now let us add another route with the same props as the Home. Call this route About with a similar rendering logic as Home.

Start by adding another component file inside src/components and name it About.js. Add the following code snippet to it.

Now add this function component as the second route, below the Home route in App.js file. Make sure to import it.

Visit the URL http://localhost:3000/about. You will notice that both the components are being rendered right now on the path /about.

The reason for this is that the regular expression engine that React Router uses internally considers both the routes that are being started with a forward slash / equal. To solve this issue, we can use another essential prop on the Home route called exact.

This exact prop is also known as a qualifier which states that the path must match exactly the / and nothing after it, such as /about. Now, if you visit the browser window at the URL http://localhost:3000/about you will notice that only the about component is getting rendered this time. 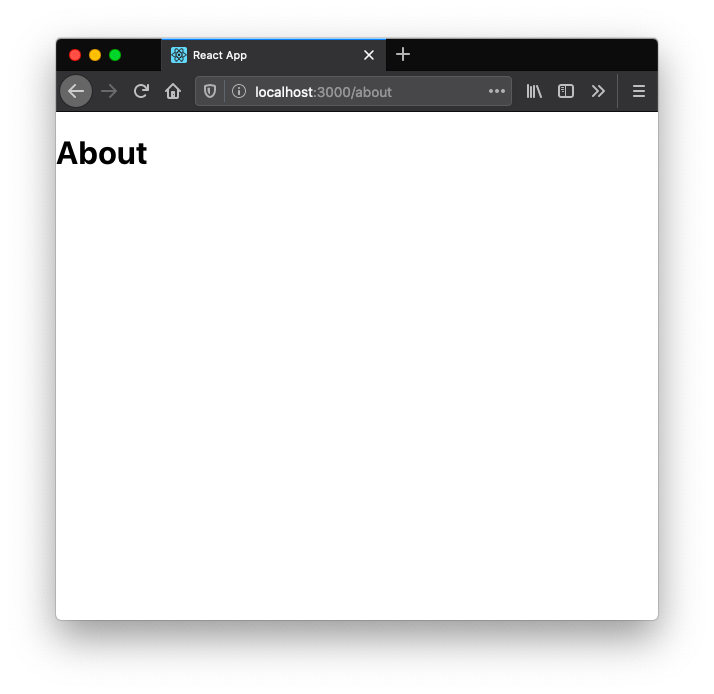 The Switch component is a unique one since it renders the component at the path of the Route exclusively. It renders a default component once the app initially renders by matching the first child Route. It allows switching between different routes when a path is matched. It is helpful if you are using the Redirect component with the Route component. Even though in this current demo, we are not going to have any redirects, let's wrap all our routes inside a Switch. Modify the App.js file as follows:

To navigate between to web pages in HTML, there is an <a href=""></a> anchor tag available. However, using this traditional approach will lead to a browser refresh. To overcome this, React Router API offers a NavLink component that can be used to navigate to a particular URL or a component.

Let us try to create a navigation menu with this new knowledge. Import NavLink from react-router-dom in App.js file. Here is the modified snippet of App component.

In the above snippet, notice that all the links are being added before all the Route components. The styling attributes inside style are optional for now. Go to the browser window, you are going to notice a navigation menu pops up at the top. Try clicking links to navigate between different components.

Adding Parameters to the Routes

In this section, you will learn how to create and manage dynamic routes based on a query parameter such as :id. We start by creating a static array that will serve as the mock data.

The idea is to demonstrate a route as /posts which displays all the posts that are coming from the array. However, each post in the array will be having an id or a unique identifier. Using that unique identifier, you will be approaching the concept of dynamic content rendering by writing the logic for URLs such as /posts/:id where :id will be represented by the specific id of a post.

To start, let us add a bunch of mock posts in the state inside a new component file called components/Posts.js. Import the following statements.

A Link component is similar to NavLink with the difference being that it can be used for other purposes rather than a navigation menu where an anchor tag is required.

Next, declare a static array of different posts.

Next, define a function component called Child. It reads anything coming from the URL parameters, such as, in this case, the id of each post. This component is going to accept one prop called match object. This object contains information about how a <Route path> matched the URL. It has four different props, but the prop you are going to use is an object called params to read the id of the post. A params object contains key/value pairs that are parsed from the URL corresponding to the dynamic segments of the path.

Then, define the Posts function component. It is going to have a state variable called posts that are going to have a default value of the mock array POSTS. Using the JavaScript's map function is going to render the list of Posts and display them as a list whenever the current location in the web browser matches /posts. The Child component is going to be the value of displaying the content (id in this case) of each post.

Now, import the newly created component inside App.js where other routes already exist.

Now, visit the URL http://localhost:3000/posts and you are going to see the list of posts. 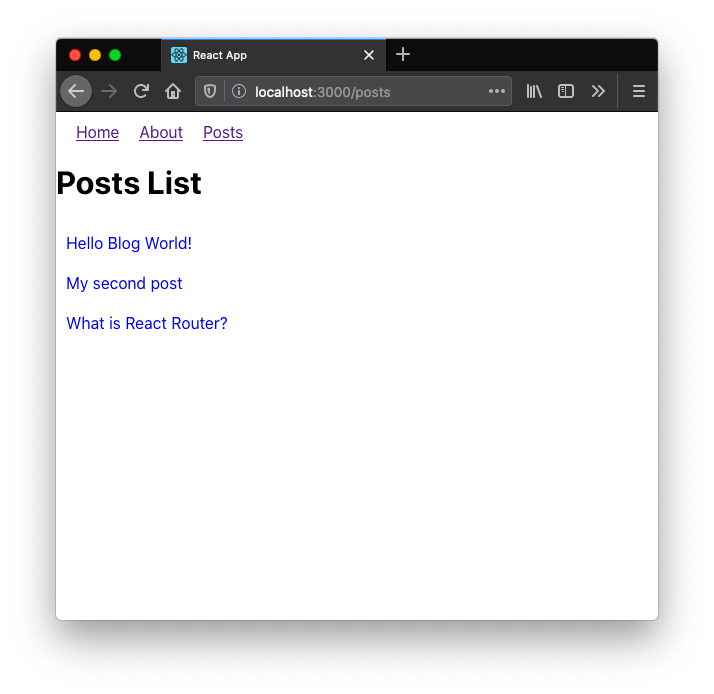 Clicking one of the posts is going to show the contents of that post. 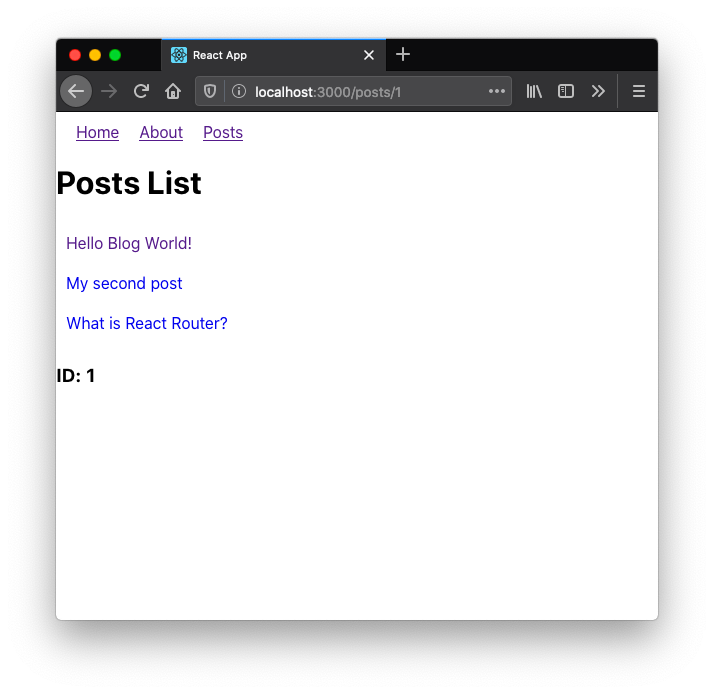 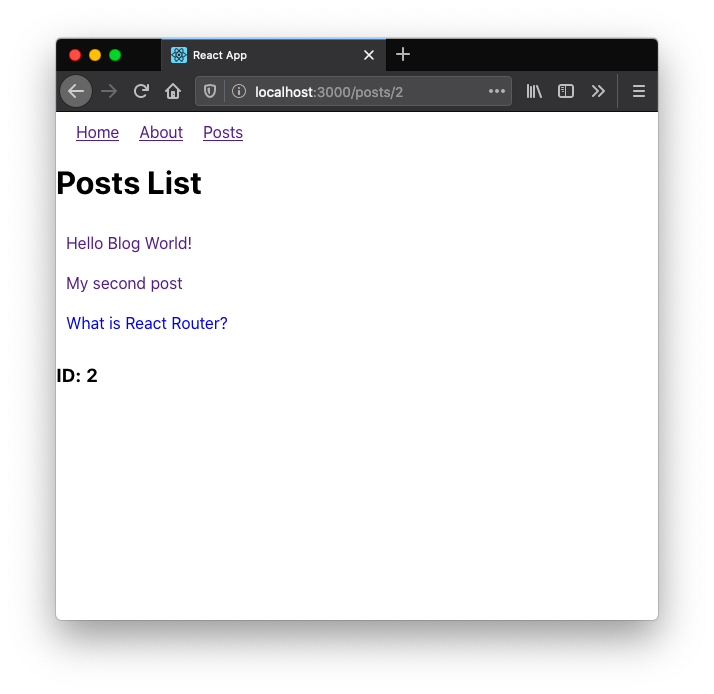 Configuring a monitoring tool can be a good asset for your React application. It is helpful to determine a user's experience in terms of performance. If you're web app is not loading as expected, when in production, you can lose a lot of users and potential customers.

A monitoring tool like Sematext Real user monitoring tool provides a way to test out performance-related issues regarding the user experience in your web app. It allows you to track page loading time, HTTP requests, UI interactions, application crashes, and so on.

To follow further, you do require a Sematext account and do note that they have a 30 day trial period that you can leverage. If you are planning to use this in production, you can also leverage their pricing plan that is defined per app. 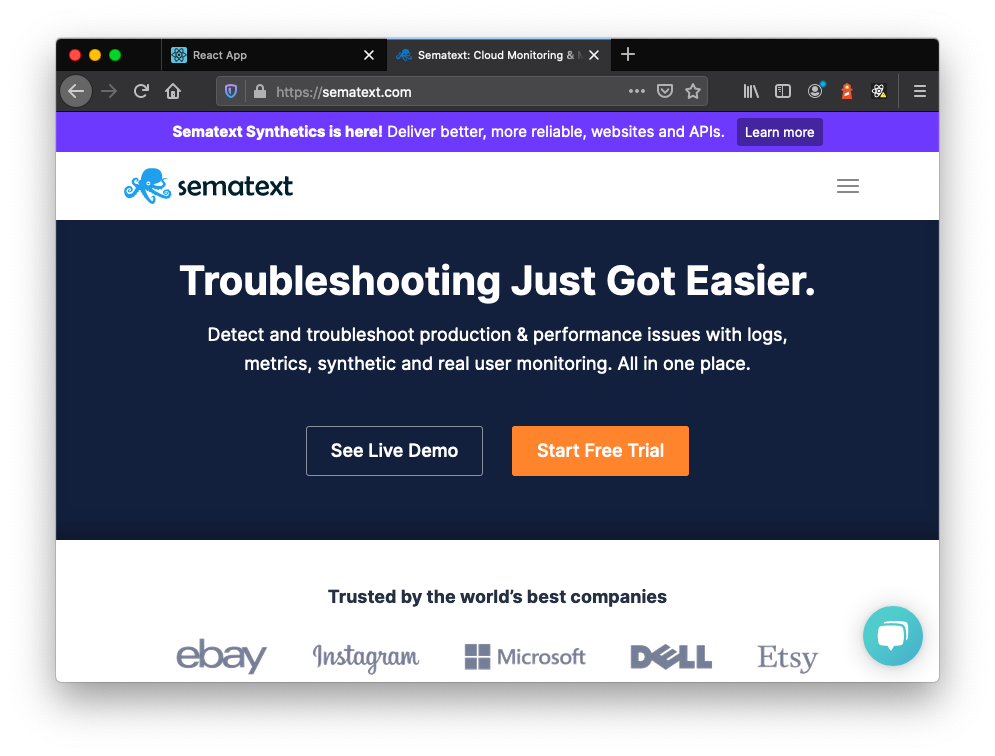 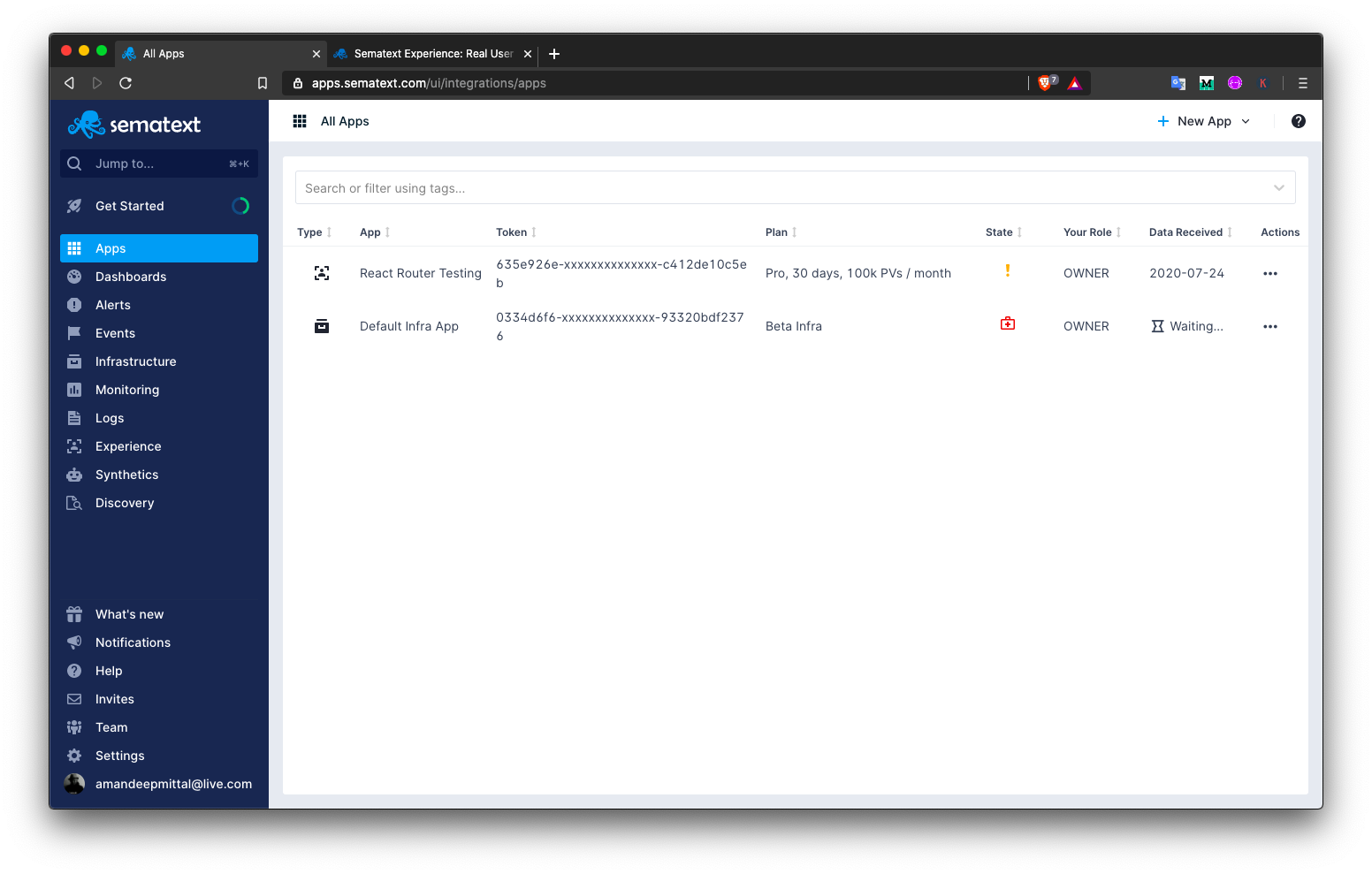 To start configuring Sematext Experience in the current demo React app, click on the New App button in the top right corner and then select Experience. 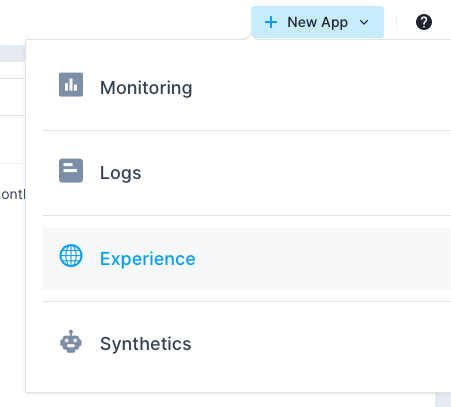 Then, enter the name of the app in the modal screen as well as make sure to check the About Website option since the current React app is trying to simulate a SPA behavior. Click the button Continue.

In the Sematext dashboard, you will be redirected to a page where there are steps to install the Experience tool. It contains some installation scripts that are necessary to add. These scripts are the integration point between the monitoring tool and your React app.

Follow this by the second step where you have to add an event listener called routeChange at the top component in your React app or where the navigation configuration is written.

Open the file src/App.js and paste the following after you have defined the history object.

This event listener is responsible for tracking whenever a route changes. It is essential, as discussed previously, the nature of a Single Page Application is to change the routes dynamically.

That's it. These are the only two steps required to configure and add the Sematext Real-time User Monitoring tool in your React app.

After integrating the installation scripts, the next step is to build the React app by running the command from a terminal window:

Once this command runs successfully, you can serve it by using the command below:

This command serves all the files in the build folder as a single page application to simulate the hosted version experience. It is going to give you an URL that you can paste in a browser window.

Once the React app is built and served, you can test it out by playing around with the different routes. It might take a moment, but the Sematext monitoring tool is fast at detecting the user interactions in the React app.

The overview of the dashboard screen as shown below tells as the initial page loading time is excellent. 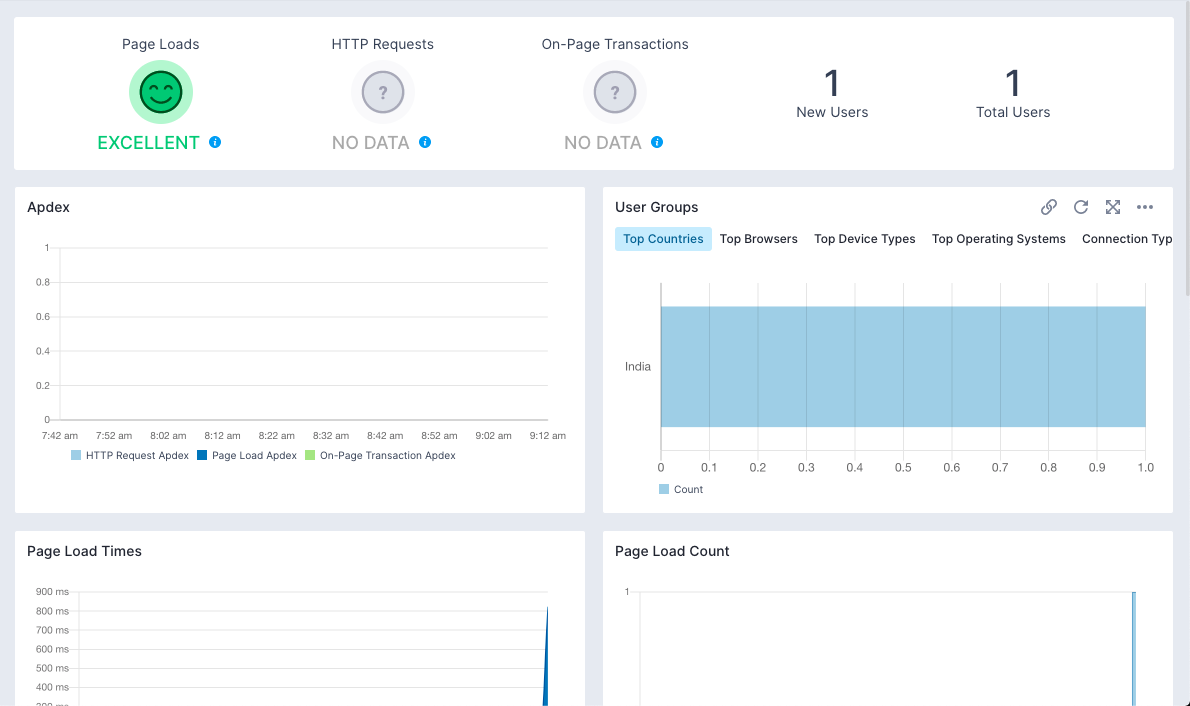 It also goes in detail by determining the exact page load time. 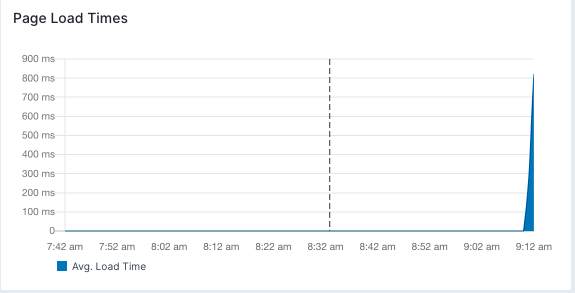 To check out the number of resources that are downloading for a particular URL, navigate to the Resources tab from the sidebar. 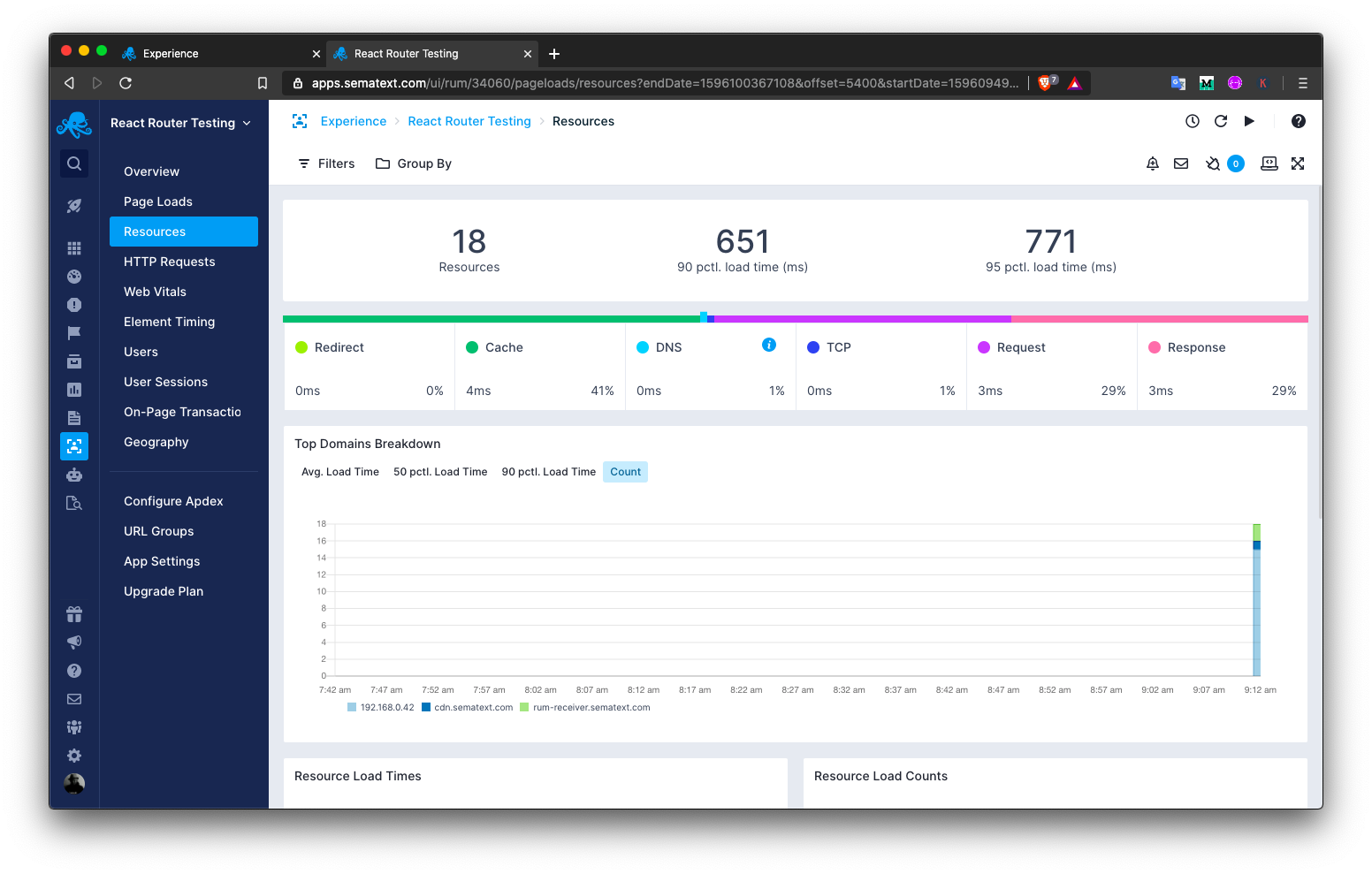 From the Users tab in the sidebar menu, you can monitor the user data such as the number of active users on the web app at a given time, the top browser being used, the maximum number of users located in which country and so on. 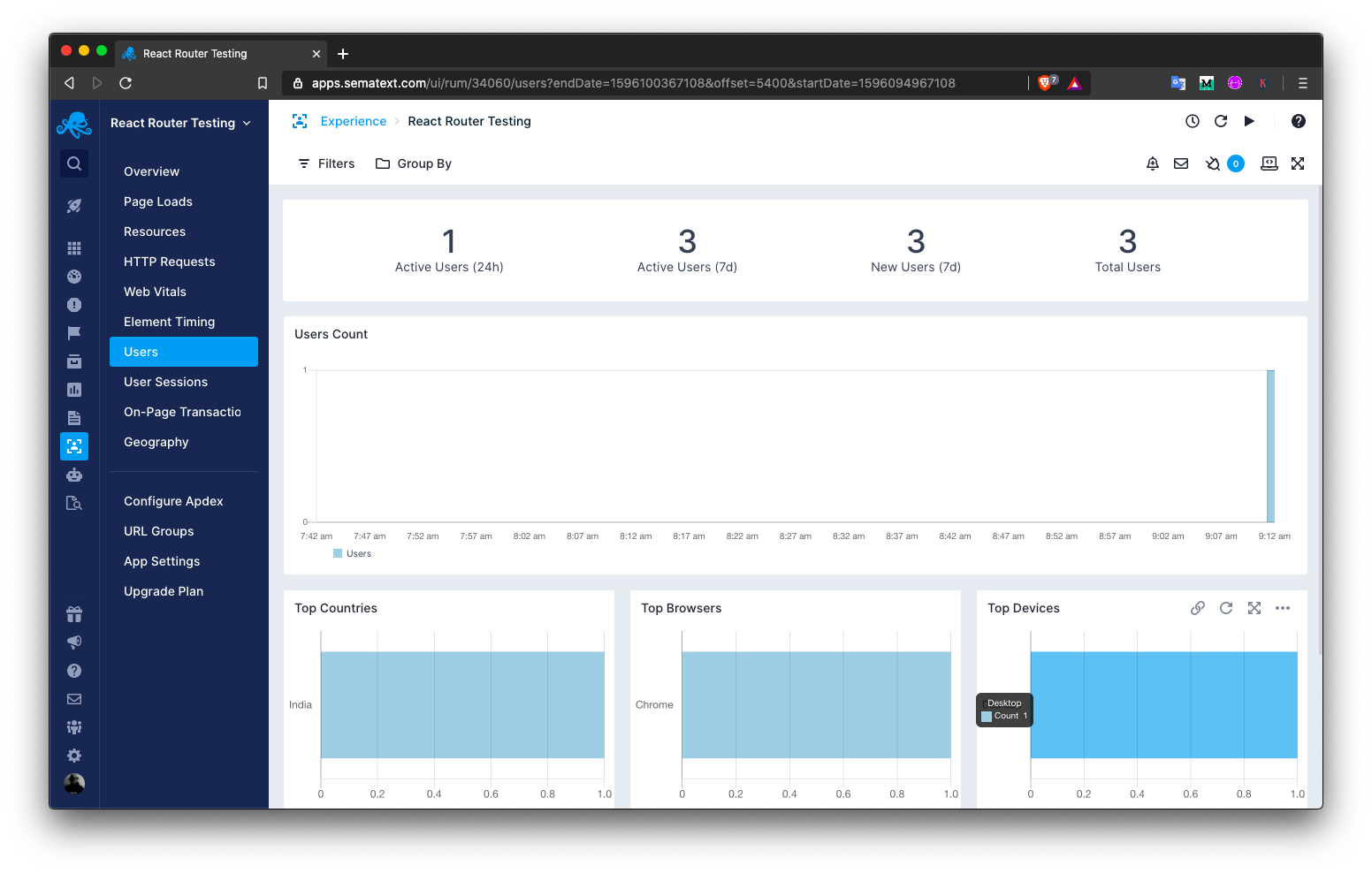 Monitoring user experience in Real-time brings an advantage to single-page applications. It not only allows you to figure out how the user experience is going on for the majority of customers but you can use this information to improve the areas of your web app to provide a much better experience. Using the Sematext Real-time User Monitoring tool with a React app is helpful in the scenario.